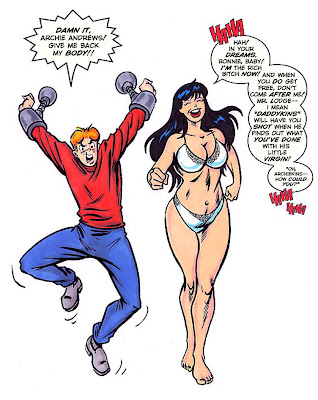 We are not talking about a regular TG caption site, though, but a kind of miscellaneous site that will take over everything from TG Comics that is not original comics.


"TGCaps will be the home for all things comics-related that, as I like to say, should have been TG. This means the modified comics, covers and cartoons that folks have created, giving them the TG twist that seems inherent in some mainstream material (at least to a few demented minds such as mine!)."

The site will also include photo comics and fan art with a TG twist.

The image included here is from the story Changing Places by Eric and Steve Zink. Click on image to enlarge!