- My oh my, she is just adorable! Look at her! Look at the way she drinks that milk. It is milk isn't it?

- Oh yeah, but spiked with female hormones. We tell her it is for the calcium.

- Hormones, but she cannot get more feminine than this, can she?

- We are aiming for a D-cup. For your benefit, of course!

- That is very considerate of you.

- Lexie, say hello to the nice young man that is visiting us!

- Yes, I guess I am, compared to you. You look great, Lexie. You are so beautiful.

- You really think so? Do you like my new outfit?

- Oh, it fits you perfectly!

- There isn't much left of Alex, is there?

- No, thank God! He was such a nasty boy, always up to some mischief. And he was trying so hard to escape, as well. It was so hard to make him understand that with a slim and feminine body like that, he couldn't become much of a man anyway.

"Alex," I told him. "You look like a girl. There are no girls out there that would like to marry a wuzz like you, so you may as well take advantage of what God's given you and become the girl your really are!" 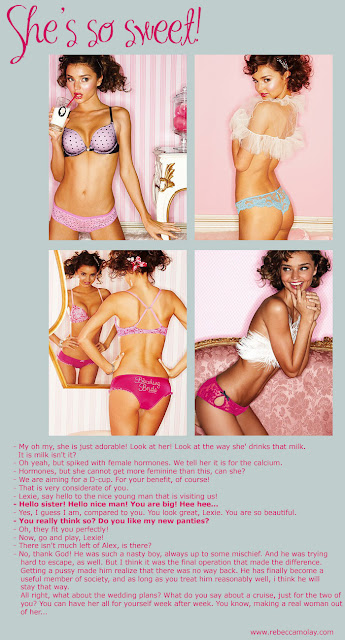 - No, not at first. He tried to do exercises, eat proteins and stuff, but fortunately all his classmates made fun of him, and his teachers called him Alexia, mistaking him for a girl. And I got mum to buy him a lot of girly clothes to make it even harder.

In the end I think he just gave up making them understand that he considered himself a boy. He started to fall into the role of being a girl. Of course, the hormones helped as well. Estrogen does that to you.

- And now he, I mean she, thinks of herself as a girl?

- Oh yeah! Don't you worry! I think it was the final operation that made the difference. Getting a pussy made him realize that there was no way back. He has finally become a useful member of society, and as long as you treat him reasonably well, I think he will stay that way.

Enough small talk! What about the wedding plans? What do you say about a cruise, just for the two of you? You can have her all for yourself week after week. You know, making a real woman out of her...

Click on images to enlarge! Pictures from Victoria's Secret.