This news story will probably get your daydreams flowing.

According to Reuters Nicole Kidman is to play in and produce the movie "The Danish Girl," based on the true story of Danish artists Einar and Greta Wegener.

Kidman is to play Einar, who took the role of a Greta's female model, and who eventually ended up changing his sex in 1931.

The picture below is of Lili Elbe as she then called herself. 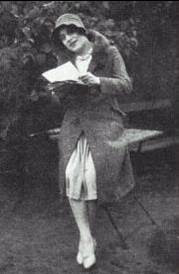 David Ebershoff's 2001 novel about Lili Elbe, was an international bestseller and has been translated into a dozen languages.
Lagt inn av Xandra kl. 1:44 AM