"For you and your brother, I am afraid there is only one thing," the lawyer had said. He had gathered the family for the reading of the testament of Charles' grand aunt Agatha. The embarrassment on the lawyer's face was unmistakable. After all, the sister of Charles and Daniel had already inherited all her Apple stock, while her housekeeper had gotten her house and her rottweiler.

The lawyer held out a golden key. "The will says that this key can be used on one of the two colored doors in the bath room in the basement. I quote: "I will ask my favorite nephews to choose wisely and with their hearts. The right door is to a life in riches, the other to a life in happiness."

The whole family had talked about the red and blue doors forever, wondering what kind of wonders were to be found behind them, but Agatha has never said a word.

Later that night the two brothers went down into the cellar of the huge mansion and approached the two doors.

"Which one do we open?" Charles asked. "The red or the blue?" They looked down and found the big dog looking up at them, tongue out.


"Which one shall we go for, Roxy?" Charles ask the dog. The dog started scratching on the red door.

"Ah, of course, Agatha would go for the red one. That is the one with happiness inside," Charles said.

"Yeah, well, but wouldn't you rather go for riches?" Daniel asked.

"What does your heart say?"

Charles put the key in the lock. It fit. He pushed the door open.

"This is strange," Daniel said. "This room is an exact copy of  the one we are in now."  And so it seemed. Charles spotted a copy of the washbasins behind them, the stalls, the lights in the ceiling.

"Why on earth would she make another rest room identical to this one?" Charles asked.

"Never mind, let us go inside and see!"

As soon as the two of them was inside the other room, it was as if their perspective shifted. Now they were looking into the room they had left, as if that was the secret room behind the red door. And behind them they could see the two washbasins and the mirrors over them. 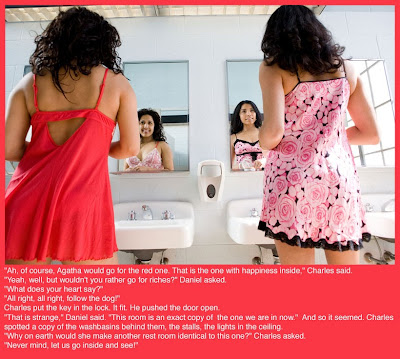 "I don't know," Daniel wheezed, "but something is seriously wrong!" He looked over at his brother who at that very moment was transforming into a beautiful Hispanic woman with long black hair. His t-shirt shimmered before settling into the shape of a bright red silk dress.

"Oh my God! Charles, you are changing!" Then he grabbed his chest, feeling soft mounds expand under his fingers. He turned around and looked at himself in the mirror. There was another beautiful woman there with long black hair and a pink dress with a floral pattern.

They were both trying hard to control their fear. Charles bit his lip, breathing heavily. He could feel his chest rise and fall under his silk negligee.

"Oh my! Aunt Agatha always said that only women could be truly happy in this world," he sighed. "This is obviously what she considers her ultimate gift to us."

"If we go back into the other room, we will probably change back again," Daniel replied. 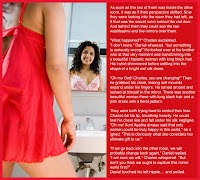 "I am sure we will," Charles whispered. "But don't you think we ought to explore this mirror world first?"