Maria and the lilitu demon 1 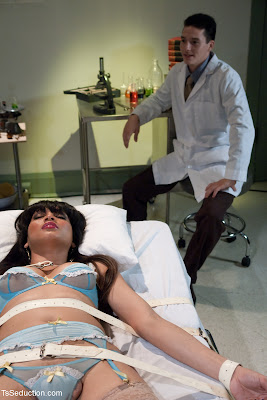 The defect presentation has been replaced!
150,000 years ago, when the human race was young, 12 lilitu demons grew out of the dreams and desires om man.
They grew out of his desperate attempts to understand what makes the universe tick: the differences between dark and light, heaven and hell, left and right, life and death, and the male and the female.
But the lilitu demons transcended anything man could imagine. They united the opposites, and appeared as women with strong masculine traits.
They decided that their role was to bring man out of his narrow mind and show him that everything is united after all.
Lilith is maybe the most famos lilitu demon of the all, so famous that she made into the myths of modern man. And right now she is working as a doctor in Manhattan, recruiting agents for the powerful Order of the goddess Inanna.
And Mark is about the have the most amazing examination of his life.
Follow Mark in his gradual transition into full womanhood in this and the next and final episode of Maria and the lilitu demon.
The images are from TSSeduction.com.
Click here to download full screen PDF-file!
Alternative download site.
You will get the final part in two weeks.
Lagt inn av Xandra kl. 12:06 AM