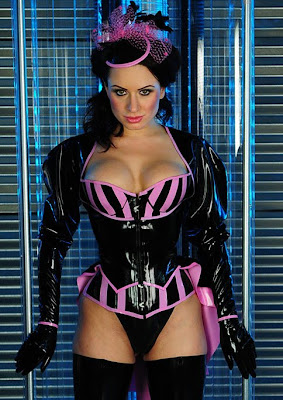 There were stories, of course, about people having entered the code for one tranporter station, ending up at another.
Only one such story had been confirmed. James Hoover became famous for entering the code for the Empire State Building, finding himself in the Moscow underground when he stepped out of the transporter box.

That had been due to a computer glitch, a spokeswoman for Google Transport had told the press.
Under no point had Mr. Hoover been in any danger, she had said. His molecules had been reassembled exactly according to the scan made at the Empire State Building and he was only one jump away from his planned destination: the red light district of Bangkok.

Google had spent millions of UN dollars to fight the urban legends about people finding their body matrix being mixed with others. This had become a popular plot in 3D spectaculars like "The Fly 7", "The Fly 8", "Return to Prison Break" and "Paranoia".

Brian had always been a trusting man, and having traveled back and forth between his home in Dallas and his workplace in Bangalore five days a week for three years, he no longer hesitated when stepping up on the transporter platform. But he always closed his eyes before hitting Enter. It was a reflex, probably.
This day, after the familiar tingling sensation that followed the jump, he hesitated before opening his eyes. Something was different. He could not smell the spicy scents of Bangalore, and his body felt different. He drew his breath and felt his lungs lifting something that felt like pillows on his chest.
He opened his eyes and looked around. This was not Indian Jump Point No. 567, that was for sure. He was looking into a private flat, and only the richest of the richest had their own transporter. At the other end of the room he could see a huge canvas depicting Brenda Ballubah, the hot and sexy holoqueen, star of erotic 3D flicks like "Inside Mrs. Robinson" and "The Rocket of Rocket Man".
He looked down, and gasped. His eyes followed the curves of a goddess. In panic he grasped his crotch. His dick was gone! He was in the body of Brenda. 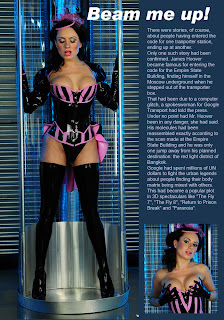 He looked down at his wrist, planning to dial 911 to alert the policy, but his Nokia was missing. He then heard a pleasant male voice in his head: "Mrs. Ballubah, do you want to call someone?" Mrs. Ballubah could, of course, afford an AI implant.
"Yes," he said, "call the police! No! Delay that, call Google Transport! No, wait...."
The AI waited. Brian looked down at his body again. Google Transport would probably not be happy if he told them about this. There would be a global breakdown in communications. Maybe people would be forced to use air planes again. Think about the pollution!
He let his hand slide over his tit and felt his nipple harden. Maybe he should make this sacrifice. He looked at all the expensive furniture. He was rich! And the real Mrs. Ballubah? She was probably in Bangalore right now, and who would believe her? 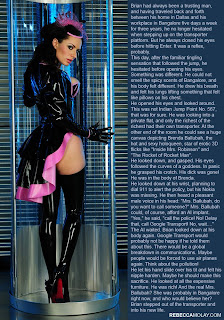 Brian stepped out of the transporter and into his new life.