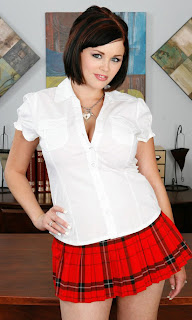 Jerry tried to escape from Babylon Academy when he realized they might change him into a girl as his punishment for starting a food war in the school canteen.

The Daughters of Ereshkigal sent one of their agents to find him, and now he is back at the Academy, as a voluptuous girl.

In this episode the witches sends Jerry to the college psychiatrist who is supposed to help him adapt to his new life. In a way she does.

The images are from the voluptuous Big Tits at School site, which comes highly recommended! If you sign up for that site, you get more than 20 additional Brazzer sites for the same prize. I use them a lot for my photo stories.

Click here to read the previous episodes in the Babylon Academy series!

Click on Full below for a full screen presentation!