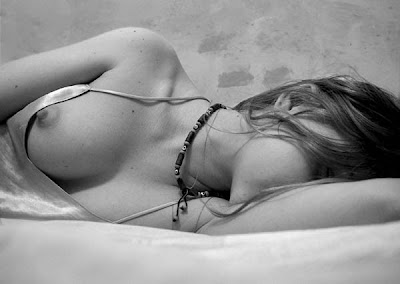 His dream gave way to confusion. There was a strange weight on his chest. He got a strand of long hair in his mouth. His hands found silky, soft, skin, totally unlike the hairy, rough, texture he was used to.

He did not open his eyes. Samantha had said something about going over to the other side, hadn't she?

This was another one of her magic spells, clearly. Once she had removed all his clothes in the middle of Oxford Street. Hilarious!

He did remember having used the terms "female logic" and "PMS" a couple of times too often in their conversation. That kind of talk always provoked her, as it should.

He loved playing the male chauvinist pig, knowing well that she knew that it was just a game. He admired her work and her intellect, immensely, and was one of the few men that didn't run away scared when they realized that she was a genuine witch.

The make-up sex had been great, as always. But his time, she had clearly felt that he needed a more serious lesson. 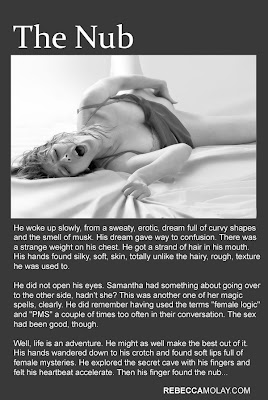 Well, life is an adventure. He might as well make the best out of it. His hands wandered down to his crotch and found soft lips full of female mysteries.

He explored the secret cave with his fingers and felt his heartbeat accelerate. Then his finger found the nub... He couldn't wait for Samantha to come home.
Lagt inn av Xandra kl. 8:41 AM