"Let me get this straight, Lena, you actually managed to convince Jeff to turn up in a red dress at the ball?"
"Oh yes, Bob. It took some arguing, but he gave in in the end."
"But did he know about the shapeshifter spell?
"Certainly. That made it easier, actually. He understood that there was a chance that the others wouldn't realize that 'Jill' was, in fact, Jeff."
"Still, becoming a girl for a night... I mean, that's a big step!"
"Well, I did promise to have sex with him afterwards. He has been after me for months now."
"Yeah, I noticed. But Jeff isn't your type, is he? Bit of a geek, if you ask me."

"Oh, but I am not going to have sex with Jeff, Bob. Of course not! I am going to have sex with Jill.
"I mean, look at him! He moves like a girl. He is blushing from all the comments he gets from the men, and a moment ago I saw him dancing with Ben. 'Jill' is actually a good dancer. She does not try to lead.
"And I would love to bury my face in that lush hair, kiss those soft lips and lick her beautiful tits.
"Come to think of it, would you like to join us after the party, Bob? I am sure Jill would enjoy having a man in bed!"
Images from Sextronix Exxxcellent.
This cap is for Jillisa over at Rachels.
Click on images to enlarge! 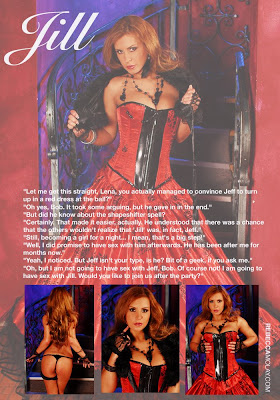