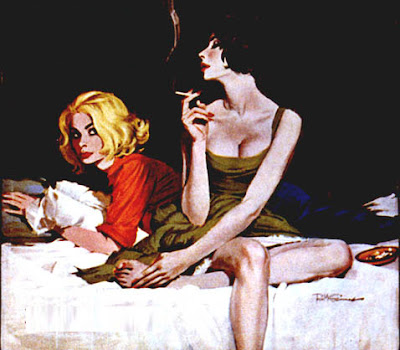 OK, baby, calm down now!
I do understand that this is another example of that twisted humor of yours, but if you want to make a joke like this one, you must at least t
ry to make it realistic.
No! No! No! Wait now! Let me see if I got this straight.
You are a man... No, I am not laughing!... You are a man called Jay from 2009.
Yesterday you were visiting a small town in Washington on a business trip. That is the state, not the capital. And you found a small store selling used books.
Now, in this bookstore you found a old and worn paperback from the 1960s called Young and Innocent. This was a hot story about a sexy lesbian couple: the blond innocent Eve and a sultry femme fatale called Rita. Right? Right!!!
You read that book at a dirty little motel that evening, you fell asleep and woke up in my bed a few hours ago -- with a long, girlish, scream I may add. You definitely woke me up! 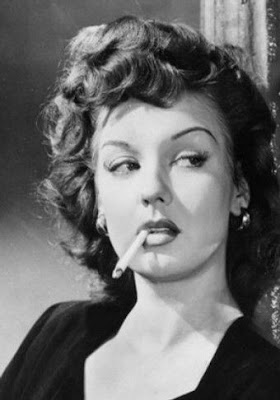 And now you have been telling me about the strange, strange world of the 21st century for the last hour, crying hysterically in between.
It is that crying that gets to me, darling. The Eve I know is calm and charming -- my sweet, sweet doll -- and the act you are putting up now is nothing like her. But that is probably the point.
Ok, I can play along! Look, here's today's newspaper. See: It says 1967. We have half a million men in Vietnam, China has the H-bomb, and the worst news of all: Jane Mansfield has died in a car crash! 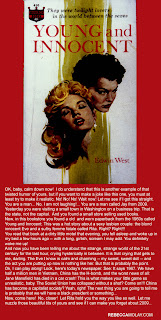 This is what makes your little game so unrealistic, baby.
The Soviet Union has collapsed without a shot? Come on!!! China has become a capitalist society? Yeah, right! The next thing you are going to tell me is probably that we will have a black president or something...
Now, come here! No, closer! Let Rita hold you the way you like so well. Let me nuzzle those beautiful tits of yours and see if I can make you forget about 2009...
Images from the Lesbian Pulp Fiction Collection
Click on images to enlarge!
This one is for Jay.
Lagt inn av Xandra kl. 11:37 AM