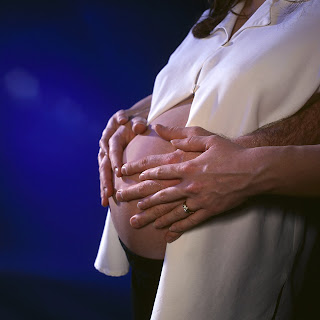 "You amaze me!" Rachel said to Benjamin.

"You are so liberal when it suits you, fighting for gender equality and defending the careers of women. But now that I am pregnant, your wife, you want me to stay at home, sacrificing my hope of becoming an executive?"


"This is about nature, dear. There are some things men cannot do, and kids need a safe and nurturing childhood environment."

"I'll give you nature!" Rachel yelled. "I am as important to our firm as you are. Now you stay at home!"

And then she whispered a few words passed down from one generation to another throughout millennia, giving the women of her family powers than few of their sisters had known.

Benjamin was still not sure if he could believe what had happened to him. But when he saw his own body leave the house heading for the office, he realized that there was more to his wife than his anyone had told him.

However, soon he sank down into that deep state of contemplation some pregnant women do, staring out into the distant future.

Well, he would definitely make sure that Rachel -- no Benjamin (damn, this was confusing!) -- took care of the kid's college fund. 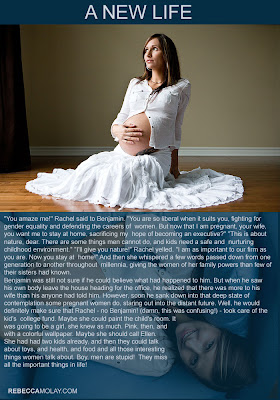 Maybe she could paint the child's room. It was going to be a girl, she knew as much. Pink, then, and with a colorful wallpaper.

Maybe she should call Ellen. She had had two kids already, and then they could talk about toys, and health, and food and all those interesting things women talk about.
Boy, men are stupid! They miss all the important things in life!
This one is for Preg Luv over at Rachel's. Click on images to enlarge!
Lagt inn av Xandra kl. 6:22 AM