Sex on the beach

Alexander didn't really have any good reason to be suspicious.

It was natural that the young, good looking, man came up to him and asked if he knew any good local guides. After all, Alexander was the best guide in the area. The man wanted to find a secluded island out in the tropical archipelago.

"You have come to right man," Alexander had replied truthfully. "Guiding is what I do for a living, and I know of some really beautiful places where the tourists will leave you alone."

That was perfect, the man said. He presented himself as Ronald. When Alexander gave him his own name, Ronald hired him on the spot.

The same afternoon they went out in the big cabin cruiser the man had rented.

"You travel alone?" Alexander asked him.

"I have a rather stressful work environment," Ronald said. "For me a holiday is relaxing away from it all on a beautiful tropic island with a good friend."

"Sure, but where is your friend?"

"Oh, she will arrive later this evening."

Alexander didn't reply to that. It wasn't that easy to find the island he was taking Ronald to, and his girlfriend would find it hard to track them. Well, S.E.P., Somebody Else's Problem. 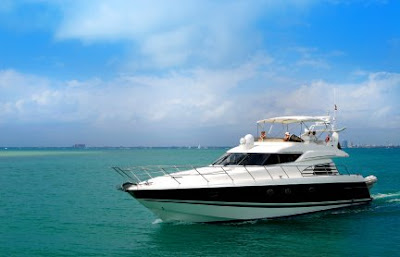 They anchored up at a beautiful beach, and Roland immediately went for a swim. He was clearly enjoying himself immensely. Alexander found himself a spot under a tree, reading a book.

Finally Ronald carried a small table out of the boat's cabin and cooked them a small meal. That was an interesting twist. Normally it was Alexander who did all the cooking on trips like these.

Ronald invited him over and served him a glass of red wine.

"What about your girlfriend?" Alexander asked.

"Alexandra will be here any minute."

"But shouldn't she have a plate as well?"

"Don't worry about it! Here's to a perfect evening!"

Ronald raised his glass to his lips, but didn't drink. Instead he watched Alexander attentively. This was a strange man, indeed!

Alexander was thirsty and took a big sip. He probably shouldn't have.

"Gaaaaakh..." He fell down to his knees, unable to speak. He tried again: "Gaaaaagh..." He tumbled down on his face, in agony. It was as if 10,000 poisonous ants were crawling through his veins.

"Try to breathe calmly," Ronald said. "And the pain will soon be over!"

That man had poisoned him. He was dying! Alexander soon realized, however, that he wasn't so much dying as changing.

He could feel his hips widen. Dark curly hair cascaded down his shoulders. His chest was growing, sprouting two beautifully shaped breasts. He grabbed his crotch in anguish, only to feel his dick shrink into oblivion, being replaced by a very female slit.

Finally the pain subsided. He opened his eyes and found Ronald looking down at him. "Hey there, Alexandra. You look stunning, girl! Why don't you join me for dinner?"

Alexander found himself trying to object, but immediately an inner force took over, and he found himself answering in a high, bell-ringing, voice: "That would be nice, Ronald!"

He sat down on the chair, still shaking from the ordeal.

"Oh, I am sorry," Ronald said. Let me get you your robe!" He went into the boat and came back with a red robe in silk. Alexander put it on over his old shorts and T-shirt. His shorts were tight around his wider hips, but there was no way he was going to remove them.

"I am sorry I had to put you through this, but I can assure you, it is all for the best. I lost my girlfriend Alexia in an accident a few weeks ago, and since then I have done anything to get her back. I am a rich man, and I did, finally, find a witch that had the magic I needed. You have now the body of Alexia, and I can assure you, your mind will follow..."

No, that couldn't be! But he soon found his mind slipping. His memory of his own childhood mixed with images of himself as a little girl, playing in a garden. He "remembered" colleagues from her workplace. Alexia was clearly a fashion designer, as images of catwalks and clothes flashed by.

"I have missed you, Alexia!" 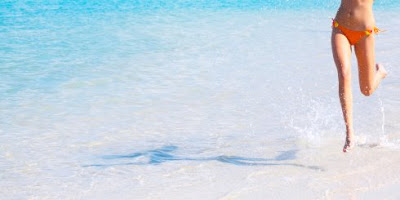 "I have missed you too, Ronald," Alexia replied. And she did! She loved this man! Roland was not a stranger. He was her man. He was her lover, wasn't he? God, this was confusing!

The strange thing was that she felt perfectly at home in her new body, as if it had been her own for more than twenty years. And it was such a beautiful body!

She was hungry. They ate in silence as old lovers sometimes do, at ease with themselves and each other.

Finally Ronald stood up and reached out for her hand. "Let's go down to the beach!" he said.

She should have been afraid -- scared to death, even -- but Alexia found herself walking calmly with Ronald down to the beach, and when he started undressing, so did she. She had to get rid of those stupid men's clothes, anyway -- didn't she?

They jumped into the water and played like dolphins for a while, and when they finally decided to walk up on the beach it felt natural for Alexia to sit down on the sand with her back resting on Ronald's chest. That is what old lovers do, isn't it?

When Ronald cupped her breasts Alexia could feel her breathing quicken in anticipation and when his hand reached her pussy she found herself moaning with pleasure.

Oh yes, she had missed this! But then again, she had never done this, had she? Or? 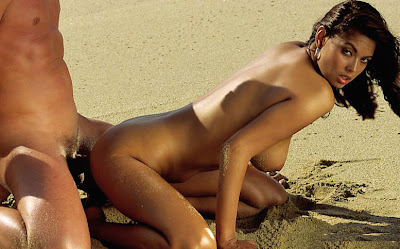 She stretched like a cat when she felt his dick stiffen against her butt. She turned around slowly and held it in her hands. She could clearly remember that she had had one of her own, not long ago, but now that seemed irrelevant somehow.

She bent down, feeling her hair form a curtain around her head, her hand and his penis. She started to suck. Slowly at first, more eagerly after a while.

She turned around again and wriggled her shapely ass towards him. "Fuck me, lover!" she heard herself say. "Fill me up with your love!"

When his penis touched her moist pussy lips she felt herself shivering with pleasure, and when he thrust his dick inside her she felt her own hips responding strongly, pushing back.

And when she finally came in a series of violent orgasms, she knew that she was Alexia forever, and that she would never go back.

This cap was made for Alexia over at Rachel's Haven.

The images are from Hustler.