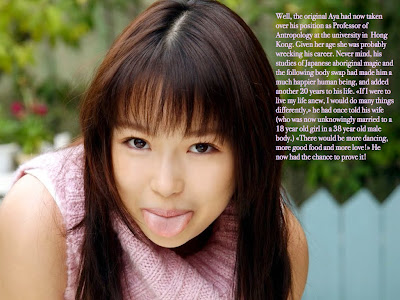 Well, the original Aya had now taken over his position as Professor of Antropology at the university in Hong Kong. Given her age she was probably wrecking his career.
Never mind, his studies of Japanese aboriginal magic and the following body swap had made him a much happier human being, and added another 20 years to his life.
«If I were to live my life anew, I would do many things differently,» he had once told his wife (who was now unknowingly married to a 18 year old girl in a 38 year old male body.) «There would be more dancing, more good food and more love!»
He now had the chance to prove it!
Lagt inn av Xandra kl. 8:58 AM