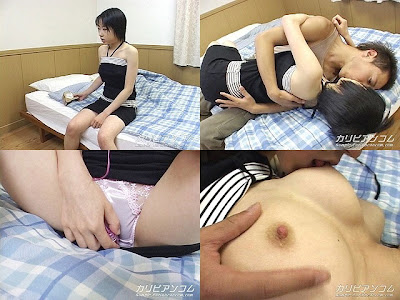 I have already given a small taste of the Japanese erotic gender bender movie, Dream Story, my favorite in this genre.
Our protagonist has found a glass bottle that has made him switch body with a young girl. In the clips I showed you last time, you could see him exploring his new female body.
In the scenes I am going to show you now, his desires are escalating. While standing in the shower, he realizes that he needs more. So he visits anold male friend of his.
The strange thing about these scenes, is the his rather proactive strategy of seducing his friend combined with his stereotypical feminine passivity when having sex.
The photo above is from a scene I have not included, where he meets the girl who is now living in his body.
The lead is Yui Aizawa.
Click here to buy/watch part 1 of the movie over at Caribbeancom
Click here to buy/watch part 2 of the movie over at Caribbeancom
WARNING! The following clip contains explicit sex scenes. For adults only!

Download this clip as a MP4/QuickTime movie.
Lagt inn av Xandra kl. 10:36 AM