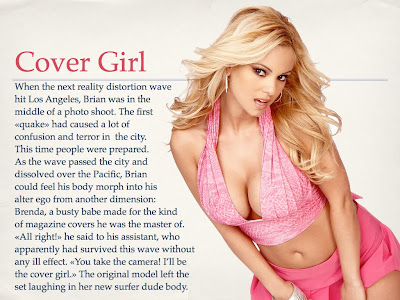 When the next reality distortion wave hit Los Angeles, Brian was in the
middle of a photo shoot.
The first «quake» had caused a lot of confusion and terror in the city.
This time people were prepared. As the wave passed the city and dissolved over the Pacific, Brian could feel his body morph into his alter ego from another dimension: Brenda, a busty babe made for the kind of magazine covers he was the master of.
«All right!» he said to his assistant, who apparently had survived this wave without
any ill effect. «You take the camera! I’ll be the cover girl.»
The original model left the set laughing in her new surfer dude body.
Lagt inn av Xandra kl. 2:20 AM