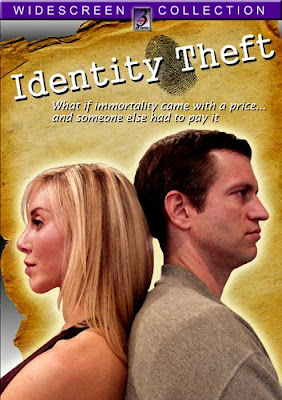 Somehow I missed this one: Another movie about a stolen body and a change of sex.

is a kind of non-porn TG comedy about a man who meets this beautiful woman, only to find her steal his body.

"A new suspense/comedy from first time writer/director James Ward. Identity Theft tells the story of Matt Walker (Ward), a man who has won the state lottery, and thinks he has found the woman of his dreams in the beautiful and mysterious Karen Bristol (Laura Weintraub of TNN's Roller Jam). She's smart, gorgeous and wants him for his body...only trouble is that's all she wants him for.
"Matt wakes up the next morning to discover that his mind is now in Karen's body and the person now in his body is a century's old body thief that moves from body to body whenever the mood strikes him. Now forced out onto the street, the new 'Karen' discovers that she is penniless and wanted by the police. Desperate, 'she' turns to her lecherous best friend Brian (Michael Cole) and bitter ex-girlfriend Lisa (Rachel Hardy) for help. Will Matt be able to get his life back or will 'she' have to spend the rest of her life as a victim of Identity Theft!"

The people who made this movie also produced the Wand of Change series some of you might have seen clips of at YouTube.
Here's the trailer:


And here is the essential "discovery scene":

Has any of you seen it? Is it any good?

Movie home page. In the US you can apparently rent it from YouTube.
Lagt inn av Xandra kl. 4:15 AM