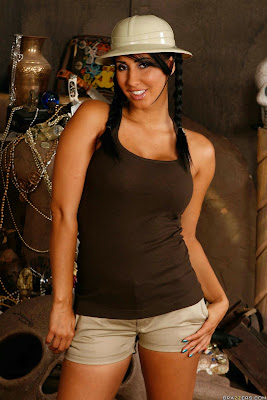 Vincent reached the cavee by midday. He and Brian had been looking for this place for over one year: the legendary Treasure of the Zulu king Shaka Zulu.
There had been the usual warnings from the local population, of course: "The treasure is cursed! Any man that enter the chamber will lose his manhood!" and so on and so forth. Superstitious nonsense all of it.
They were a little surprised when they did enter the cave.
"Damn, it looks like some kind of Hollywood movie set!" Vincent said. "It must be fake!"
"It certainly looks like the cave of the Phantom," Brian, referring to the Lee Falk comic strip. "Maybe Kit Walker is more than a myth."
However, as they started exploring the cave, they soon found that the "props" were more than 200 years old, and that all the skulls were put there to scare superstitious peasants away.
It was as if the necklace was calling for him. It was close to sunset, and Vincent picked it up and looked at it. Maybe it will look good on me, he thought. Why he should think women's jewelery should look good on him, he did not know, but he was already under its spell.
He put it on, and within seconds he was looking down at two mounds of flesh protruding from his chest. "Help!" he cried out, his voiced scarily high in pitch. "Help! Brian! I am changing!" 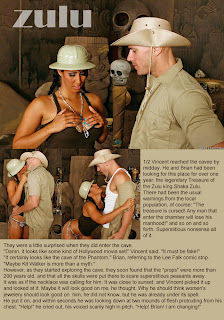 "Well, that is amazing!" Brian said. "I have never seen anything like it. The curse is true. I was starting to wonder when I got the urged to try on the tiara over in the corner there. I resisted."
Vincent looked over at Brian in bewilderment. The man was so big, and strong, and muscular. And he was so small and soft. He had never found Brian attractive before. Forbidden images flashed through his head.
"Have you tried to take it off?" Brian asked. Vickie looked up at him with fascination. "Why should I take it off?" It was pretty. She was pretty. She felt good. She wanted to make this man feel good. She fell down on her knees and opened his zipper. Yummy! Man meat.
Brian looked down at the young, sexy girl with amazement. "Vincent!" he said. "What are you doing?"
"Vincent is gone!" the young girl said, stroking his dick. "He was such a boring old fart, anyway. This is so much more fun!" She bent over and wriggled her ass. "Now, big man, take me!" 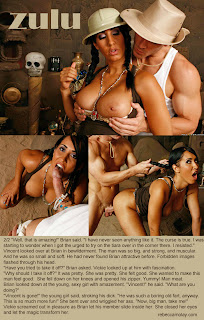 Vickie screamed out in pleasure as Brian let his member slide inside her. She closed her eyes and let the magic transform her.
Click on images to enlarge!
This one is for Heavenlyareolae
The model is Isis Love and the images are from Brazzers.com.
Lagt inn av Xandra kl. 6:54 AM