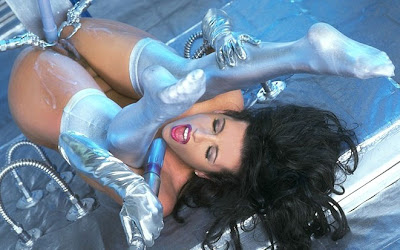 When the alien space ship turned up outside the international space station, Daniel thought it was a joke made by the Chinese.
It soon turned out that the spacefarers were far from Chinese. He was kidnapped and transported to an asteroid outside the Proxima Femme system, where they experimented on him for several months using his DNA as a blueprint for ever more fantastic transformation.
It wasn't until they transformed into the body of a young woman that he returned to something resembling sanity. He tried to plan for his escape, but they had started studying human sexuality and it was hard for him to concentrate.
The only way off the asteroid was by space ship, and his driver's licence didn't cover that kind of vehicles. 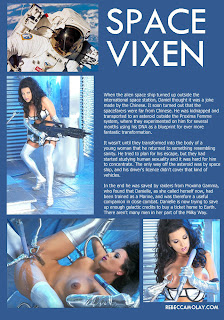 In the end he was saved by raiders from Proxima Gamma, who found that Danielle, as she called herself now, had been trained as a Marine, and was therefore a useful companion in close combat. Danielle is now trying to save up enough galactic credits to buy a ticket home to Earth. There aren't many men in her part of the Milky Way.
Click on images to enlarge!
The pictures of the model Taimie Hannun are taken from Galactic Girls.
This one is for Danielle!
Lagt inn av Xandra kl. 7:37 AM