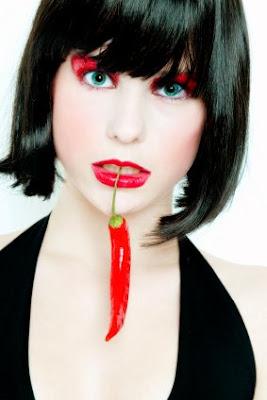 Ron had always embraced his feminine side, becoming a understanding and caring husband for Jill.

Like many feminist men before him, however, he soon found out that there may be a difference between what some women officially say that they want, and what their subconscious look for in a man.

The transformation had been quick. He had taken one sip of the Elixir of Inanna, helpfully provided by his wife, and found himself a gorgeous woman a few minutes later.

“If you want to behave like a sissy, you can just as well be a girl,” his wife told him and went out to find her well equipped lover.

It took Ronja several months with therapy to come to terms with the fact that he now had a woman’s body.

It wasn't too bad really. No one would despise him anymore for crying or for watching Operah on TV.

Still, there was one major problem. Ronja spent a lot of time in the shower, but apart from that, the new woman's sexual life was disappointing.

“You have to make peace with your sexuality,” his therapist told him. “Find yourself
a nice man.” 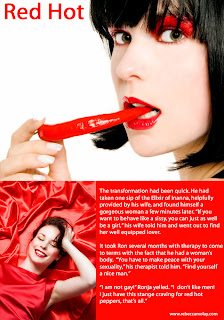 “I am not gay!” Ronja yelled. “I don’t like men! I used to be one remember. I wouldn't dream of touching their strong, muscular, sweaty bodies!

"I just have this strange craving for red hot peppers, that’s all.”

Photos from istockphoto.com. There is of course no relationship between the model and the fictional character of the story.