The Genie and I 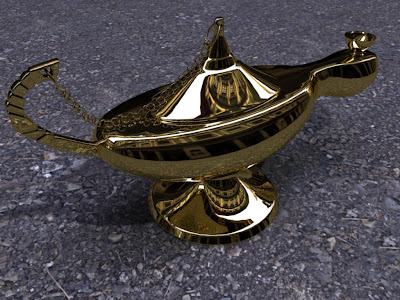 My grandfather had been a sailor, a long time ago, between the wars. He told us the most amazing tales -- about the sea serpent off the coast of Borneo and the pretty girls in Japan.

"I met a Geisha called Pretty Pretty Pi, once" he said. Grandmother was scowling.
Now he was dead, and I had inherited a loft full of junk. No diamonds, as he had claimed, nor gold from King Solomon's mines.
I did find an old oil lamp of the Middle Easter type, though. He had bought it from the Shah of Persia he told us, but I found "Made in the Republic of China" printed at the bottom.
I brushed it anyway, most out of spite and boredom. I nearly had a heart attack when a male figure "whooshed" out of the bottle and folded his arms. "Good evening, my dear Sir. I am Chang Kai Chek, the famous Persian genie!"
He didn't look much Persian too me. "Chang Kai Check was Chinese," I said. What could I say?
"Ah, you are a learned gentleman, I see. Then you maybe succeed in formulating a wish that gives you what your heart desires."
I was obviously turning raving mad. I decided that I might as well play along, and I told him a secret I hadn't told anyone, anywhere. I spilled out my heart out to him.
"I want to be a woman," I told him. I had never felt at home in my male body, and had looked longingly at all the beautiful girls surrounding me at school and at work.
"No, no, no! You cannot ask me for that!" He looked shocked and upset.
"Why not?" I asked.
"Have you any idea of how boring it is, staying in that dusty lamp year after year? There is nothing to read and no cable. My only joy is to be awakened like this and make some fun of my masters..."
"Fun?" 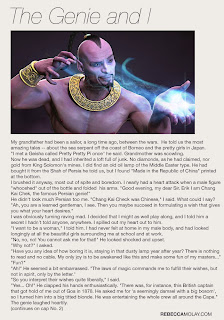 "Ah!" He seemed a bit embarrassed. "The laws of magic commands me to fulfill their wishes, but not in spirit, only by the letter."
"So you interpret their wishes quite liberally," I said.
"Yes... Oh!" He clapped his hands enthusiastically. "There was, for instance, this British captain that got hold of me out of Goa in 1878.
He asked me for 'a seemingly damsel with a big bosom', so I turned him into a big titted blonde. He was entertaining the whole crew all around the Cape." The genie laughed heartily.
"So I can't ask you to become a woman, because that takes the fun out of it?"
"Yepp."
"Why are you so focused on turning men into women? I mean, there are so many stories of that kind around."
"Eh, eh well." He stopped talking.
"Eh well what?"
"I think they are so beautiful. The women, you know. They move so gracefully. And they have so beautiful clothes. I remember a Geisha in Japan once called Pretty Pretty Pi. She had the most adorable smile. She could fill the whole room with sunshine. And the men are so ugly, and they get so desperate when their tits start growing. They don't know that I am doing them a favor."
"Do genies have genders?"
"What? Of course we have. When we have served out 107 wishes we may retire in Florida and live perfectly normal lives." 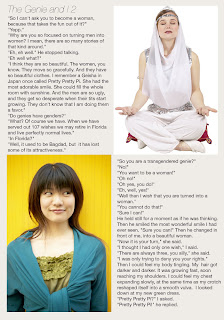 He held still for a moment as if he was thinking. Then he smiled the most wonderful smile I had ever seen. "Sure you can!" Then he changed in front of me, into a beautiful woman.
"Now it is your turn," she said.
"I thought I had only one wish," I said.
"There are always three, you silly," she said. "I was only trying to deny you your rights."
Then I could feel my body tingling. My hair got darker and darker. It was growing fast, soon reaching my shoulders. I could feel my chest expanding slowly, at the same time as my crotch reshaped itself into a smooth vulva. I looked down at my new green dress.
"Pretty Pretty Pi?" I asked.
"Pretty Pretty Pi!" he replied.

This one is dedicated to Courtney.
Click on images to enlarge!
Lagt inn av Xandra kl. 7:16 AM