The Strange Case of Dr. Jeckel and Ms. Hide 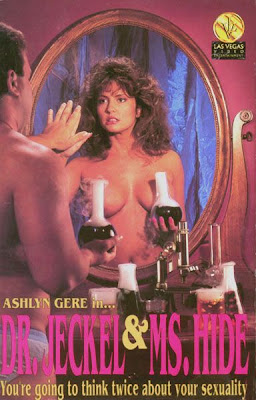 There have been made many porn versions of Dr. Jeckyl and Mr. Hyde, where the dear doctor is turned -- not into his dark counterpart, but into a sexy woman.
Michael Craig's version from 1993 contains a lot of humor, including a reference to the dreams of crossdressers.
Any movie, even one set in a fantasy or science fiction universe like this one, has to adhere to a set of rules. You have to believe that what the characters do make sense.
This one is a bit ambiguous in this respect. It takes time before the dear doctor actually understand that he has become a woman, but when he does he does react with the expected sense of confusion -- I guess.
But it is disappointingly common in movies like this for the protagonist to give in for the first attempt at seduction. Just like that!
Still, there are some great mirror scenes here!
You may buy it or watch it over at MoviesPlanet.
WARNING! The following clip contains a scene with explicit sex! This is for adults only!