An interview with Cheryl of trangender movie site Tranisa 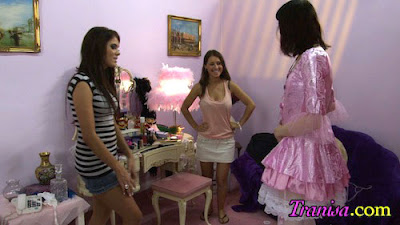 I have had an interesting discussion with Cheryl, the owner of the new Tranisa transgender movie site, I would like to share with you.
Apart from the picture of Cheryl, these are all images taken from movies sold at the site.

Q: I am impressed with the speed you were able to put up the site and produced the first 15 films. You seem to have a lot of experience from media. Is this what you do in "real life"?

A: Yes in 'Real life' I am involved with video production and provide video facilities for both corporate and consumer markets.

A couple of years ago a new client approached us who runs a very well known successful adult web site, our task was to improve on the quality of the films he was making. This led on to meeting many people with careers in the adult entertainment industry. We are still making the films for our client and he is very happy with what we produce, almost 200 short films so far.

A: As we knew we would be starting off with only 15 films we knew we would have to try and cover as many TG genres as we could with a small number of titles whilst not spending too much in case it didn’t work. We had no idea at the time what would be popular and what would not be. We also wanted to try and be a bit different adding some form of realism to each fantasy and by having a simple story to follow.

Q: You have asked your visitors about what they want. What kind of fantasy seems to be the most popular one?

A: Being caught / discovered having a liking for dressing up and then losing control over what happens next. Basically if you can think of a fantasy its been suggested to us and if you can't think of one, it's also been suggested :-) 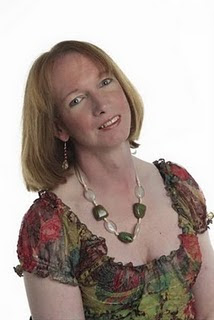 Q: You are catering both to transformation and crossdressing fantasies. I guess this must mean that you consider them part of the same continuum. I am asking because I see that in some online forums for exchange of crossdreamer fantasies, there are those that go exclusively for the crossdressing part or the full or magical transformation variant.

I have always been fascinated with the before and after images, particularly with transsexuals. Being able to take a male and then present the illusion of being female.
Before beginning the Tranisa project I didn't realise how popular the 'magical transformation' fantasies are. I'm guilty of running with my own set of fantasies.

Q: You have decided not to produce hard core films. Why is that?

A: We do have two films 'Post-Op Pussy Peeper' and 'My Transsexual Girlfriend' which are of a solo post op TS which feature hard core close-ups of the vagina being penetrated. We included these two just in case hard core was demanded by the customer but these have not proved very popular.

Q: This last year or so I have witnessed a new discussion on the existence of female to male crossdreamers. Will you ever consider making a film about a woman being changed into a man?


A: So far we have not had any requests for F to M, but we would consider if there was a demand.

Q: Seriously, are there enough potential M2F transgender customers out there to make this a sustainable business?

A: I've always believed that the interest in the transgender spectrum is actually more popular than people will admit but time will tell if we can make this sustainable, I don’t think there will ever be Bentley’s on a gravel driveway. It is likely to remain a part-time hobby but it’s great fun if a little exhausting on a filming day.

Q: How did you find the actors? I am surprised to see that so many are willing to expose themselves in this way. Are we facing a new generation of crossdressers and crossdreamers that do not feel the same amount of embarrassment as many old-timers?

A: Interesting question, the female actors have come through the contacts we have made filming the other adult films for our client. All of the girls do some form of hard core but find it really refreshing working for us as they are asked not to 'get their hands dirty'. It also allows them to show off their own acting skills which they enjoy.
Some really do get into the scenario and come out with some great autogynephilic one liners. Many of the girls we worked with were not aware of the interest in men transforming into women and they found it fascinating, they really enjoy putting makeup on guys and turning them into girls.

The male actors have been much harder to source. Ideally we need a TG who has a degree of skill at presenting themselves so as they look good as a female and be prepared to show their male self too. We have acquired a number of contacts which we hope will be successful transformations in the New Year.

We pay all our actors the market rate for appearing in such films so I guess in some cases this will tempt a person to appear who perhaps normally would not. Some male actors have used the experience to build confidence about appearing as a female.

Q: Where do you find the costumes used by the actors?

They may bring a favourite outfit themselves, which we can use in the story line. Failing that there is always the local shops for everyday outfits. I also purchase quantities from wholesales specialising in outrageous outfits too.

Q: You have your own dedicated make-up artist on set, Tania. Doing make-up for a film is not exactly the same as for real life, is it?

A: Tania has appeared in our make-up tuition film and also as a character in the two model films but she hasn’t been there for most of the films.

Q: You have your own personal blog, Lost in Transgender (great title by the way!), where you reflect on transgender issues and
crossdreaming/autogynephilia. Do you think crossdressers and crossdreamers spend much time on reflecting on who they are and why they are who they are?

A: Yes I think TG's spend much too much time obsessing about why and who they are and I’m very guilty of this too. However I would say that since discovering 'Confessions of an Autogynephiliac' now 'Crossdreamers' I have discovered a home and do feel more settled within myself. Before this, despite being out and about on the tranny scene, I always felt that there was an itch I could not scratch.

Q: Can transgender erotica in any way help crossdressers and crossdreamers understand themselves? 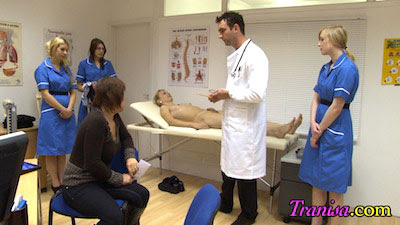 A: Erotica in whatever form seems to be something we are naturally drawn to depending upon how our brains are wired. Personally erotica has not helped me to understand things better in my head but it has not harmed me either. It seems to be a requirement like food.
I think being able to enjoy your sexuality with out feeling guilt after the event is important. As I've got older and matured my sexuality has almost become a spiritual experience. Perhaps it was because I learnt to drop the guilt?

Q: When I look at the photos I see of you, you look very much like your inner woman. How do you balance your life as a biological man with your feminine side?

A: I really don't know, very difficult. If I had more confidence I would have probably changed all those years ago, however the AGP motivation worries me regarding transition.

Q: Have you ever considered taking the last step: becoming a woman in the flesh as well?

A: I've played with the hormones, and seen all the gender specialists and still don't know. I think I'm both male and female at the same time. I've been concentrating on appreciating my male self more this past year, after all there must be some worth in Paul.

Q: What's next for you and Tranisa?

A: Well all being well we hope to make another 6 films in January which will be released shortly after filming.
Lagt inn av Xandra kl. 4:53 AM