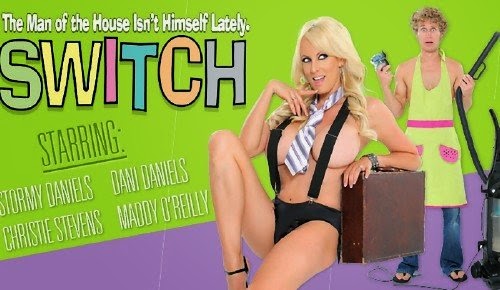 Kim and David have two kids and a nice home in the suburbs, but their marriage has become rocky.

After a heated argument they both wish that the other could see things from his or her point of view. And yes, when they wake up, they find themselves forced to live the life of the other.

Is it any good?

Well yes, but not for the reasons you might expect. It has clearly not been made by transformations enthusiasts. David does get to have lesbian sex as a woman, but that is not the main point here. The rest of the sex scenes are, as is often the case, simple add ons to the story, pretty much unrelated to the plot (which is why there are no explicit scenes in the clip included below).

No, the surprising thing about this movie is that it is actually very funny in a family sitcom kind of way. Stormy Daniels, who plays the body of Kim, and Michael Vegas, the body of David, do some really decent comedy acting.

This is a study of gender stereotypes, dammit!

You can buy and see the movie here!