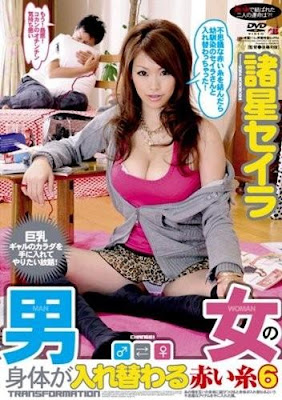 Indeed, the setting is often also similar: schools, with teenagers swapping. I guess this reflects a general Japanese male interest in school girls in uniform. Whatever causes crossdreaming, it is bound to be shaped by the local culture.

I will follow up my post on the popular Red String series of movies, giving you a taste of Red String 6, code named idol121.

The red string is a magical conductor that leads to the body swap.

Version 6 follows the formula to the letter. But why is it than when the boys become girls they become enthusiastic explorers, while the girls become paralyzed and stupid?

The following clip is sexually explicit and for adults only!


If the embedding does not work, you may download the clip here.

If you want to buy the movie, the following stores may be of help: (search for idol121 or IDOL-121)