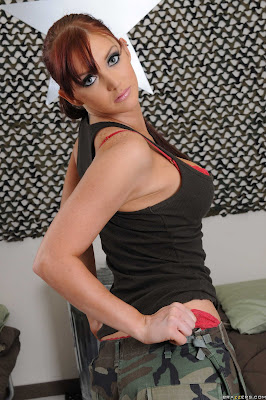 Andy could hear the whistling sound of the projectile as he and Seargant Mike Sanders took cover in the ditch. It landed a klick behind them with a load thump. They waited for an explosion that never came.

"What the fuck?"
Andy looked back and saw a strange eerie blue light emanating from the small crater. A maple tree standing close by shifted... that was the only word he could think of... and was replaced by a palm tree.

"Damn it!" the sergeant muttered. "They have gotten hold of RDM's. The Chinese has probably sold it to them."

"Reality Distortion Munitions. Have you been sleeping through instructions again? Turn on your protective force field at once, private!"

Andy fumbled with the switch, but the small lamp on his body armor did not turn to green.

"Have you forgotten to recharge your force field generator, son?" The sergeant sounded exasperated. "Goddammit!!!"

Another round landed just 5o meters from their position. The blue light hurt Andy's eyes. When he opened them, his mouth tasted different -- sweeter somehow. He was breathing differently. 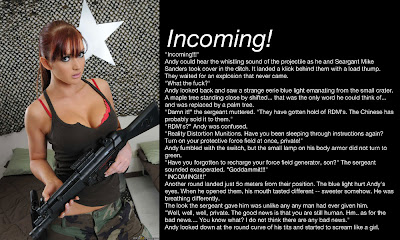 The look the sergeant gave him was unlike any any man had ever given him.

"Well, well, well, private. The good news is that you are still human. Hm.. as for the bad news.... You know what? I do not think there are any bad news."

Andy looked down at the round curve of his tits and started to scream like a girl.
The photos of Ashley Veronica are from Brazzers.com.
Click on images to enlarge!
Lagt inn av Xandra kl. 2:09 AM