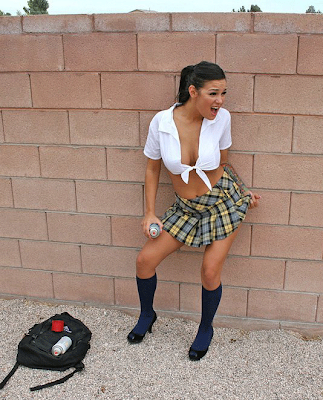 Principal Sorensons new school policy was brutal, but simple. Any student of the New Mayfair College for Unruly Boys would immediately be changed into a girl when caught in an act of vandalism.
The whole school was enclosed by a magic circle forged by some of the most powerful magicians in the country. Any violation of school regulations would be detected and acted upon.
Given that this unorthodox approach was not approved by the National Board of Education (not that they would believe him, anyway), Principal Sorenson had tactfully avoided telling his young students about his new policy.
Hence Chris was happily preparing to tag the brand new school brick fence with his create signature "Butch".
He didn't get started, as he soon realized that something drastic had happened. His white shirt had changed into a blouse that barely covered his (he could hardly believe this) breasts!!!
His school uniform trousers had become a very short skirt and on his feet he found feminine shoes with high heels. He screamed and screamed and screamed in a high, intense, soprano voice. 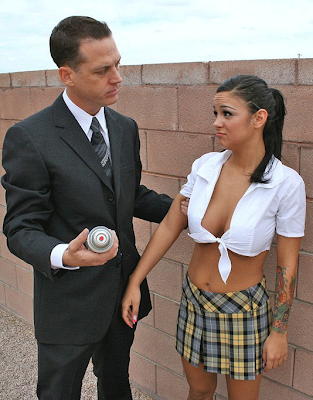 Principal Sorensen had looked forward to this, and went with a brisk walk down to the fence.
"Now, now, now. Isn't it young Christine?" he said, in that annoying voice teachers use all over the world.

He even used the "we" word: "We haven't tried tagging the wall, now, have we?"
Chris, now Christine, was still to shocked to speak and followed Sorensen meekly into his office.
The strange thing about modern students of Chris's age is that they actually are used to magic. Not in real life, admittedly, but in games, comic books and movies.
So as soon as the first shock subsided, Christine silently concluded that the Principal was using magic, that this was illegal and that he -- ehr, she -- didn't have to admit to anything.
She said so, in so many words.
Another strange thing about colleges of today is that principals like Sorensen are actually prepared for those kind of arguments. Sorensen knew that no court or school board would believe anything of what had happened here anyway, and decided to teach young Christine a lesson she would never forget.

He uttered another spell, and Christine found herself submerged in new and intense feelings and fantasies. Her new female body took over, pumping female hormones into her hot bloodstream.

Strong images of a phallic nature filled her mind, and when Sorensen pulled out his dick, she felt compelled to touch it. She tried as best as she could to resist her new urges, but she soon found herself sucking his dick, eagerly.

Next he lifted her small body up on the table. Sam found that her new muscles were far too weak to offer any resistance.
Besides, all these new, strange and dangerously delicious feelings made her dizzy and aroused, and some part of her looked eagerly forward to what the Principal would do next.
He lifted her legs and thrust his dick into her pussy. Christine cried out, in fear at first, but gradually his thrusting movements made her more and more horny. She could feel her face getting flushed and her brand new vagina getting moist.
When he turned her forcefully around and held her down on the table with her ass i the air, she cried both out of desperation and lust, and soon found her own pelvis responding rhythmically to his movements.
She was seriously starting to like this. 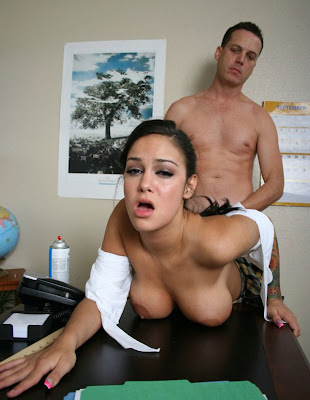 Only minutes ago she had been a pimply geek and looser. Now he was a sexy fox of a woman being rammed by a powerful man that desired her deeply.
Sam had never admitted as much to his comrades, but he was, in fact, a virgin, and the only intimate relationship he had ever had, was with his own five fingers.
This was sex of a totally different nature. This was animalistic, this was ecstatic, this was dirty and delicious and she just could not get enough of it.
When Christine finally slid down the wall in the principal's office, totally exhausted and covered in cum, she new that her life would never be the same again.
Soon the spell lost its grip on reality and Chris found himself to be the young boy he used to be.
He left the Principal's office, trembling and shaking, promising the man that he would never tag a wall again.
Deep down, however, he knew that this wasn't true. He told his best friends, Alex and René, about his adventures over their everlasting game of Age of Conan.
This was clearly more exiting than anything they had ever experienced in real life, and Alex and René dared him to try another tagging attempt. He expected as much, of course, but insisted that they join him in this blatant violation of school rules. And so they did. 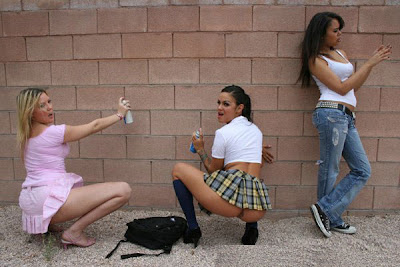 Now the three of them regularly go to the new brick wall to make attempts at tagging.

They never get as far as spraying that "Bitch" tag on the wall, but the Principal still insists on punishing Christine, Alexandra and Randi for trying.

It is a kind of win-win-win-win situation, really.